Trauma Therapy: Take Another Look (It’s not what you think).

Jim has a problem. His wife of twenty years sends him to therapy. She says, “I don’t like hanging out with you anymore.” He’s hurt and defensive. Jim has no idea what a gift his wife is giving him.

“I just don’t understand what she wants from me.”

Stephanie wants Jim, the guy she married twenty years ago. She traces the path they’ve been on, trying to see where she lost him.

“I always thought it was my fault…He never wanted sex…He preferred late night television to me…He drank, but I didn’t think he was an alcoholic…He stopped exercising and gained a lot of weight. He told me I shouldn’t badger him about it…I’ve been missing him for seventeen years.”

Jim has a drinking problem. But it’s not just alcohol that keeps him numb to the world around him. Overeating, sugary foods, overspending, and zoning in front of the big screen also dull his senses to the rainbow of possibility in his life. He medicates his pain, the hurt from decades of suppressing trauma memories…but he also anesthetizes himself to joy, the abundance and color of his family, the nature in his backyard, the friends who used to come over.

Jim has a process addiction. He does certain things over and over in an attempt to feel better. For a while, it was working too much. Then it was late-night bingeing. Then it was vodka. But the hamburgers and ice cream and alcohol take their toll. At 50, he’s no longer the sharp-witted guy Stephanie remembers. He’s mentally sluggish, grumpy, overweight, and easily set off by small threats to his control. When Stephanie tries to get him to eat better, exercise, turn off the TV, he either (1) barks at her to stop nagging, or (2) pouts silently. She’s done with both.

Jim realizes, in a small corner of his mind, that he needs help. He also realizes, on some deep, dark, neglected level, that his behavior is linked to how his dad treated him. Now that their own son is a teenager, Jim has trouble putting those memories behind him.

Jim says, “It’s not like I was beaten or starved.” He thinks “trauma” doesn’t apply to him. “It’s just that my dad wasn’t around. He had his own life. He popped in and out of mine when it suited him.”

What Jim’s little boy self learned from this was, “I’m unimportant.” And he’s been trying to cope with the feeling of unimportance for 50 years. He says it’s too late for him to change.

Trauma therapy for Jim includes EMDR (eye-movement desensitization and reprocessing). We target whatever memories or emotions go with his problem, which lead us back to the point of origin…the place where it all began. We start with his addictions and his feeling of being unappreciated by Stephanie. We start with his fear of being a bad father to his own boy.

EMDR allows us to follow the pathways back to the original hurts, to reprocess the memory material there, and to install new templates for future behavior. After three or four sessions, Jim starts to feel calmer. He has new thoughts, out of the blue. I was a precious child, just like my son. I deserved better from my dad. Jim starts to attend AA, for support. He finds people who understand his struggle. With continued EMDR, Jim gets stronger, replaces the bad habits with new hobbies. Stephanie joins us for couple sessions. They reconnect.

It’s not overnight, but the EMDR process works. Trauma recovery works. Jim gets his life back – and Stephanie gets her Jim back. And although they still have work to do, the path to that work is now clear.

For more articles about couple’s therapy, check out these blogs posts: 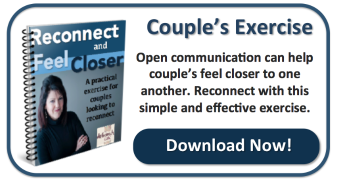