Stuck at the Pageant: Why we have trouble with Hillary 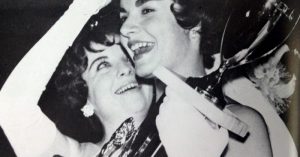 I just realized I’ve been duped again by Internalized Sexism. I thought I was well past this. But I bought in, unconsciously, to the sliming of an important woman.

When I look at her record of public service, I find no question or doubt. Hillary Clinton is the most qualified person to ever seek the White House. Not to get into her foreign policy or her campaign funding or anything else we might reasonably argue about . . . Hillary’s record represents care and attention to issues of the public good, namely universal health care, children’s welfare, and women’s rights. Things I care about, and if you’re reading this, things you probably care about too.

But for a number of months, I felt leery and disappointed in her. I listened to rumors about conspiracies and scandals. I absorbed the barrage of criticisms and insults being slung at her from all directions. I started to see her as greedy, power-hungry, and without conscience.

And who knows about all of that? But try to square it up next to what she’s done to push social equality forward in her lifetime and you may see a larger truth. I certainly do.

We don’t want to know how good she is.

Here’s a woman who’s transcended every ceiling in modern imagination. She’s incredibly gifted, productive, and experienced. Her life’s work has been consistent for decades. Which kind of makes me say: What have I been doing all this time? Twiddling my thumbs?

I have not accomplished things my grandmother whispered about, reverently, when I was ten or fifteen or nineteen: singing or acting, running for public office, winning the Van Cliburn, creating a line of girls’ English riding outfits. Those were mere fantasies as we watched Chris Evert win Wimbledon, when we heard Hillary Clinton talk about sexism at work, when Geraldine Ferraro became a vice-presidential candidate.

We also watched Miss Arkansas win the Miss America Pageant, knowing I wouldn’t take that route but secretly wishing I could. Now, there’s this feeling I let my grandmother down by not doing or becoming any of those things.

Most women compete at appearing non-competitive. We hide the fact that we want to be the best, do the most, and look the hottest, because to admit these yearnings would drop us down several notches on the ladder of transcendence. We’re not supposed to strive. It should just happen. Yet if it happens, we probably did something nasty to make it happen.

This internalized misogyny, the unconscious absorption of negative attitudes toward women, keeps us hamstrung between stylishness and audaciousness. We must police our bodies at every angle, every age, and every new encounter. We can’t be too outspoken, too colorful, or too sexual. We must be both gifted and stand for something important. We need to achieve notoriety, for our skills or beauty, or we are nobody. If another woman achieves the un-achievable, we resent her for it. We want to elbow her out of the limelight and grab the microphone.

Who does she think she is?

Why doesn’t she smile more often?

I refuse to watch her coronation.

Internalized misogyny makes us dislike our own gender so much that we: (1) seek to rise above it, and then (2) hate the others who seem to do just that.

My autobiographical novel, Wife Material, is all about internalized sexism and how it keeps us from doing things we need to do.

Here’s my to-do list for shedding misogyny in this election year.