Dis-Fellowshipping: When People get Shunned 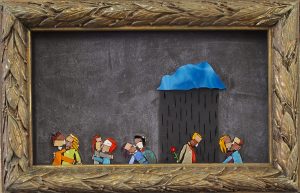 I have shunned and been shunned.

What leads me to turn my back? Repeated bullying or toxic behavior that takes a mental or physical toll. Abuse toward me or others, without acknowledgement of impact. It makes me sad, but out of self-preservation, I’ve sometimes hit the eject button.

On an individual level, we need to, mindfully, cut people out when they seem unwilling to stop hurting us. But what happens when a person is dis-fellowshipped or ostracized by their church? Rejected by an entire faith community? What dynamics call for excommunication? And what’s the impact?

I grew up in a fundamentalist church, the Church of Christ, that shunned or dis-fellowshipped people for a variety of perceived sins or doctrinal differences (disagreement meant heresy). The whole group refused to socialize with the person and they were officially “kicked out.” Most of the “sins” that got people thrown out of church were sexual in nature: divorce without the approval of the elders, an affair, sex outside marriage, being gay, and marrying after a divorce. The elders and deacons concerned themselves, in a big way, with our mating behavior, a big part of the story in my novel, Wife Material.

Effects of Being Shunned

And the people who got dis-fellowshipped? I hope they spoke their minds to someone . . . or that they were having so much fun fornicating that they didn’t care two flips about the church. But I think most of them were deeply wounded and silenced by the experience. I know some of these people, personally. Their stories are trauma stories. They felt a kind of helpless, muted rage that had no resolution. They stopped trusting people – even themselves. They experienced condemned isolation.

Today, we know more than ever about the effects of being cut out, dis-fellowshipped, or ostracized – and they’re devastating. The effects of exclusion bear remarkable similarity to the effects of physical pain. Long-term impact of humiliation and loss of community includes hopelessness, rage, depression, inability to make decisions, loss of self-care, and even suicidal feelings. We humans need connection like we need water and air.

In their research compilation, Lowell Gaernter and Jonathan Iuzzini make the case that if a person feels extremely ostracized by a community or society, they are more at risk for violent behavior, even mass violence. Evidence suggests ostracism affects young brains by limiting cognitive ability. And even just recalling a past social shunning event creates extreme distress, affecting hormonal balance and the entire nervous system.

Think about this for a moment. I think the massive human brutality we’ve seen recently stems directly from social exclusion on a grand scale. Not just “mental health issues.” Not just “weapons in the wrong hands.” Not just religious differences or poverty or racial intolerance. Not just poor parenting or untreated PTSD. It comes from all those things. And all those things come from dis-fellowshipping, ostracism, and the shutting out of people at the margins. We can no longer afford to guard our borders as if they were real points of separation. When we reject and ignore the needs of people, send them packing if they see the world differently, we contribute to widespread despair that has no outlet, no solution, no hope.

So, here’s a challenge: LET’S PUT AN END TO DISFELLOWSHIPPING OF ALL KINDS. Are you in?

Wherever you are, consider the people in your orbit who are not well embraced by the group. What do they look like? How do they annoy or confuse? What happens to you in their presence? Can you make meaningful eye contact? Consider who they are and how they could be suffering at the edges of the community. Reach out to them. Look for areas of common interest and start there.

It matters how we treat each other.