I Must be a Bad Person: Recovering from Religious Abuse

Something tells me I’m a very bad person. 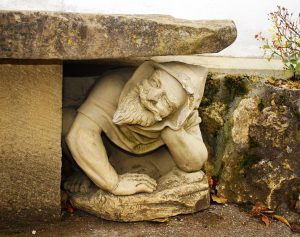 Under the bridge…..beneath, “It’s my fault,” lives a more troubling idea…It hides in us like a troll under a bridge. Anyone who’s survived religious abuse knows the old thought-training dies hard.

Jim teaches art to high-schoolers. He lives with his wife of thirty years – the wife who mothered their four children. He never admits being gay, but he says he once had a “sexual problem involving other men.”

We meet because of Jim’s panic attacks, which have resurfaced after 20 years of dormancy. He has them at the oddest times: once, on the highway in his Toyota, another dozen times at home, doing nothing in particular.

Jim tells me his father hit him with a belt for, “saying my thoughts out loud.” Sex was completely ignored in his fundamentalist family and his parents led a Bible study group on the evils of homosexuality.

I call this spiritual/religious abuse. I call this sadistic parenting. I call this major childhood trauma. I suggest Jim has PTSD. We start EMDR therapy. I ask Jim about his worst memories. He says, “My father barging in on me in the bathroom and beating me in the shower with his belt.”

Through the EMDR process, Jim shares a series of negative beliefs that come with the memory.

Jim releases a flood of boyhood tears. His body relaxes. This takes about four sessions. I see his face change. I see his posture change. He gets taller. He tells me he’s painting again. After another four weeks, he is clear of panic symptoms.

“I’m freer now. I can simply be angry and sad about my past.” Jim no longer has to throw a tarp over his true feelings just because they are unsightly to his family.

He still has some emotional work ahead of him. Jim has to grapple with the fact that he has never been free to be truly himself – that he’s pretended to be hetero to protect himself from his father, their church, the elders, the larger culture that surrounded it all. Jim and his wife will need couples counseling to cut through the invisible fence of secrets that has stood between them and mystified them both. Who knows where this will lead….?

But at least the secrets can be unpacked and he knows they’re not his fault. Free of this blame, Jim has emotional options that didn’t exist last year. As he talks honestly with his wife, his depression lifts. Many tears are shed, but windows of possibility open to the sky. There is life after truth-telling: life after PTSD and loneliness and despair.

My novel, Wife Material, is also a story about religious/spiritual abuse. Call me if you’d like to talk about this kind of trauma or learn about how EMDR therapy can help you heal from it.