How Lies Put Us Into Trance and How to Stay Awake 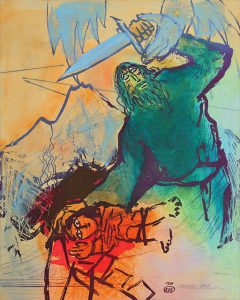 Lies often come from authority-figures. When I was growing up, preachers told the story of Abraham and Isaac: the one about how Abraham takes his child to a mountaintop and prepares to stab him to death as a sacrifice to God (whose ego must have been puny).Every time the story was told, a part of me screamed, ludicrous!!!! Another part of me got drowsy and tried to forget this awful scene on a big rock and the boy who saw his dad raise a machete to plunge into his chest.

I no longer believe that Abraham, following divine orders, set out to do away with his only child, only to be stopped at the last nanosecond by the hand of the almighty. And even if it IS true, I refuse to take it as some exemplar of righteousness, as I was taught. I see it as a pretty horrifying cultural myth . . . or a kind of lie.

A client of mine was told she was “disgustingly ugly” by an older boy, when she was twelve. This lie persists in her psyche, at age 45, even though she’s beautiful by all cultural standards.

Turns out, it hurts us to believe lies. Even a little exposure to falsehood causes us to spend mental energy processing a piece of information that never completely goes away, even if we’re shown that it’s completely false.

This happens to survivors of bullying and abuse, all the time:

You don’t know what you’re talking about.

She didn’t mean it.

Boys will be boys.

Every child gets spanked.

You’re making a big deal about nothing.

You know I love you.

Lies infiltrate our thought-systems, sneak their way past our defenses and better knowledge. Lies become partially accepted at an unconscious level. We start to believe things that have no basis in reality – or things that a bully or perpetrator wants us to think, instead of trusting our own perceptions and conscience.

This Is a TRANCE STATE.

When we ingest information that fails to match up with other things we hold true, our brains go limp, trying to deal with the discrepancy. Senses dampen; energy drains. The more often we hear untruth, the more we trance. The more we trance, the more vulnerable we are to accidents, assaults, or forgetfulness (e.g., leaving your wallet at the restaurant).

Please fight trance in yourself and others. Write something on paper every day. Listen to your thoughts. Say them aloud. Keep your eyes and ears open. Stay awake. Listen to each other.