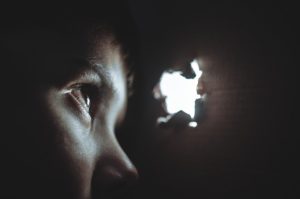 I know you: You don’t want to hurt anybody, ever. But you grew up around someone who behaved irresponsibly when they were angry. You’d prefer take it out on yourself than be anything like that person. That person showed scary anger dissociation.

It’s all about anger numbing.

Even though they’re complicated, each of these scary behaviors involves anger dissociation or numbing. Evidence from EMDR research suggests the part of the brain that lights up when we feel strong emotion gets dampened in dissociation. That sounds backwards, but trying not to feel anger puts us at more risk of bad behavior than actually feeling anger. Your parent, step-parent, grandparent, or other related adult dissociated or diverted their anger. Perhaps they started dissociating because someone’s anger scared them when they were growing up. Numbing leads to scary behavior, instead of alert problem-solving.

But YOU are not your ancestor: YOU have the ability to do something very different with your anger. As you become more familiar with it, you can feel it more directly and choose how you want to respond. You have the resources to be a very different kind of parent, teacher, officer, leader. You can evolve into anger wisdom.

Homework: Share a story about someone whose anger scared you.