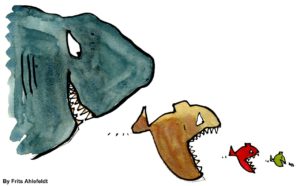 Twenty years ago, I had an experience that demonstrates anger grooming, gender, and power in conservative White U.S. culture. I taught a required diversity course to graduate counseling students, right here at Missouri State. One week, I lectured on U.S. culture as a “culture of dominance.” The mostly-White class discussed how we’d been groomed to see our race as deserving of all the special privileges we held over people of color. Nobody felt happy about it, but most of us understood at least some of the reality of it . . .

. . . except for one student, a White man in his early forties. He filed outraged complaints against me up and down the university’s administrative chain. “She called me a dominator!” He finally went to my spouse, a professor in the same department, and urged him to rein me in and make me apologize for calling him a racist (which I never actually called him). It became a show of this man’s anger dominance.

I remember thinking: What could he do to me? In a meeting with the faculty, his face burned deep red and he shook as he spoke. “I’m not a racist!” He appealed to every White male authority figure in my life and I suspected he followed me for a while and knew where I lived. This same man had flirted openly with me at the beginning of the semester, asked inappropriate questions about my private life, tried to stand too close. I had insomnia for months.

Anger Dominance: Who Has the Say-So Power?

American culture values hierarchy, a system in which people or groups are ranked, one above the other, in terms of their relative power or authority. George Lakoff, a Berkeley cognitive and linguistics scholar, writes about America’s Conservative Moral Hierarchy. The underlying U.S. power structure privileges men over women, adults over children, humans over the earth, Whites over people of color, straight people over gay people, rich people over poor people, and Christians over non-Christians.

If someone questions the hierarchy, dares to raise their voice to someone above them in the power structure, all hell breaks loose.

You have no right to talk to me that way!

Can you hear the narcissism in anger dominance? I believe the invisible power hierarchy creates many of our problems with anger. Robin DiAngelo calls it White Fragility.

Natural, grounded anger clarifies individual rights, which makes it a very political emotion, in the family and in society.

Homework: Have you ever used anger to dominate someone? What about the reverse? Write about that.